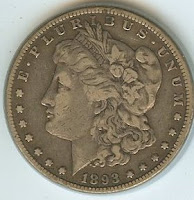 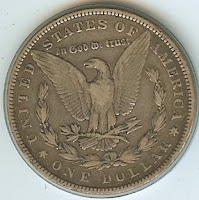 Certain years are very elusive. For example the 1895 is only available as a proof of which 880 were minted. The 12,000 circulation strikes are assumed to have been melted down rather than be made available to the general public. The 1893-S is another key year as only 100,000 were minted and mint state coins are exceedingly rare fetching values in the $75,000+ range.

The coin shown in the pictures above is an 1893. 378,000 of these were struck for circulation at the mint in Philadelphia. Interestingly Carson City minted the most coins this year at 677,000 but today the coins from Carson City are more valuable especially in the higher grades.

I find silver dollars very enjoyable in terms of weight, eye appeal as well as use as currency. Dollar coins were rarely very popular. In colonial times through the late 1800’s coins in lower denominations were more useful for commerce and dollar coins, particularly trade dollars, were used for overseas transactions. In recent years Eisenhower (1971-1978) dollars were considered bulky, Susan B. Anthony (1978-1981, 1999) dollars were confused with quarters, Sacagawea (2000-present) just never caught on. The same fate may befall the current introduction of presidential dollar coins slated to run from 2007-2016.
Posted by Steve Gupta at 2:47 PM
Labels: hobbies