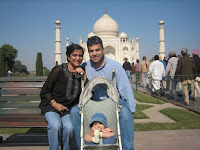 Welcome to Delhi which as opposed to being part of a state, is actually a federally administered union territory. A city of 11 million people is somewhat difficult to navigate yet we did make our way to Meera Bagh and were welcomed by the family. Saturday is not a holiday so the shop owners and people in service were all at work. Also with exams looming the school aged children are busy with studies. Still it was nice to see everybody including my parents who arrived the previous day.

The bungalow where we stayed was originally constructed by my Mommas with each brother taking a floor. Today it is still occupied by Sunil and Daman, while Arun has built a bungalow two doors down which is currently under construction. The community is quite peaceful and there is a park which could find people walking at all hours of the day and kids playing cricket and other games at various times.

The food in Delhi was excellent. For you health conscience fans of Indian food, you better hope that Monika Mommi opens a restaurant. Before I delve too much into the culinary delights, I really should start with Agra.

It was decided that if we wanted to see the Taj Mahal, we should go on Sunday as my Mom would be traveling to Amritsar for two days and we had plans for later in the week with Daman Momma and Arun Momma hosting dinners.

Sunday morning our Tourist Taxi arrived at 7:00 AM for a private drive to Agra 180 km outside of Delhi. In the U.S. one would expect 111 miles to take no more than 2 hours and the train to Agra does take about that long. For us the journey was 4.5 hours, but it was remarkably pleasant to take in the countryside and take in the street performers with monkeys and snakes. Arriving in Agra around noon our driver set us up with a “guide” as we swing by Agra Fort and then make our way to the Taj Mahal east entrance.

Guide was mentioned in quotes as tourists are an incredible boon to the local economy. I am sure there is an extensive kick back system including our driver, guide, restaurants and shops which we stopped at. Regardless it cannot take away from the beauty of Agra. It is an incredibly beautiful and the construction is remarkable in its symmetry and materials. Extensive steps have been made to preserve Agra by limiting vehicle large vehicle traffic in the area and having visitors wear booties or remove there shoes when touring the actual building.

Our guide was less than helpful and in the end he asked for 350 rupees and I gave him 300 rupees. I also ended up buying some marble at one of the stops. The biggest slip economically was paying 750 rupees each to enter Agra while India residents only pay 20 rupees. Ratna could have easily purchased our tickets as locals, but as far as maintaining the grounds and the Taj Mahal I don’t mind kicking in my $19 each.

We stayed at Agra for about a little under two hours and took lots of pictures and enjoyed the grounds and the Taj Mahal. We did create quite the spectacle carrying Diya around in the Bjorn, but that was entertaining for us as well. On the way home we stopped by Vrindavan to visit the temples. I can’t even tell you which temple we actually entered, but it was a bustling little stop and quite an ordeal for our driver. More on that in installment 4 of a Passage to India.
Posted by Steve Gupta at 1:41 PM
Labels: travel