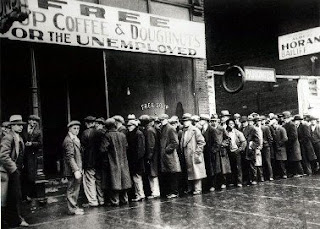 With the continuing announcement of layoffs and scaled back hiring, there is a potential to return to unemployment levels not seen since the 1930’s. October’s unemployment number was up to 6.5% from 6.1% based on a drop in non-farm payrolls of 240,000. Per the Bureau of Labor Statistics the civilian labor force consists of 155 million persons, 10 million of who are currently unemployed.

Current forecasts predict unemployment to peak at 7.5% which would mean another 1.5 million persons will lose their current positions and be unable to find work. My contention for double digit unemployment is based on a tipping point philosophy. As an additional 1% of workers leave the workforce that is a reduction in 1.5M x $36K average salary of $56 billion savings for industry is $56 billion less consumer spending. The government answer is a $150 billion stimulus package which in theory would ramp up spending and create jobs.

The problem is that the 153 million persons who are employed will take that $1000 and squirrel it away in preparation for their seemingly inevitable layoff. Now $56 billion + $150 billion has left the economy as consumer spending has dropped and government has given money back instead of spending it.

20% unemployment means 31 million persons out of work, triple the current number. At that point there will most likely be a social upheaval which forces an infrastructure investment putting Americans back to work with significant deficit spending. The key to sustaining the economy will be to control spending when the government‘s feet are not held to the fire. Of course 15 years down the road this will all probably feel like a bad dream.

The only saving grace is that, unlike previous economic downturns, a greater percentage of households are dual income. This will allow families to maintain some income and health insurance as long as the particular geography and household is diversified. If the entire town works for a given factory this would not work.
Posted by Steve Gupta at 2:36 PM
Labels: finance, opinion