Do I have an obsession with stuff? I intend to explore this issue with 3 spending buckets, big ticket items, daily use items, and other. In terms of big ticket items such as household furnishings, cars and appliances, I feel that I stay well within my comfort zone and by some standards may even appear frugal. Daily use items such as shoes and clothing are another area I feel to be well in control and maintain a balance as to not accumulate beyond my current level. The other category is the killer and for me it circles around sporting goods and to a lesser extent electronics and kitchen gadgets.

This year electronics played a significant role with an LCD television, sound bar, and Wii player. Kitchen gadgets were over the top this year with a couple of knives, cutting board, food scale, baking dish, egg slicer and flat griddle. There was also a replacement toaster. Sporting goods were on the high side as well with a heart rate monitor, running shoes, swim suit, goggles, bicycling computer, pedals and compact crankset. Interestingly collectibles were at zero for the year, even though I attended a few shows.

While the actual purchases for the year seem pretty moderate, I did shop for countless other items. Typically I failed to make a purchase by rationalizing the cost benefit as most items are replacement items. Occasionally a failed purchase was purely financial. In a surprising number of cases, I simply lost interest.
There is only so much stuff one needs or can play with at any given time.

My basement is filled with ski equipment, scuba gear, climbing gear, golf clubs and tennis gear from days gone by. I would argue that I got my full use out of the items listed. I define full use with an arbitrary $5/hour consumption rate. For example, if I purchased a $140 tennis racket, I better damn well spend at least 28 hours playing tennis. 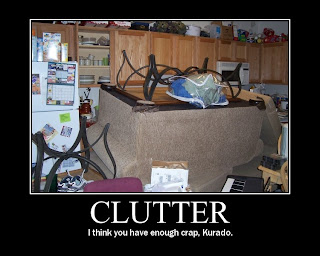 I guess the best indicator that I have an obsession with stuff is the fact that this topic was considered as a post and was written.
Posted by Steve Gupta at 12:08 PM
Labels: shopping

I am so not looking forward to going through the basement and getting ready for this baby. It seems like a daunting task but organization is the key to declutter. I think we have done a great job starting with closets and working our way down the house- see you in the basement, honey! :-)