Put Me in Coach 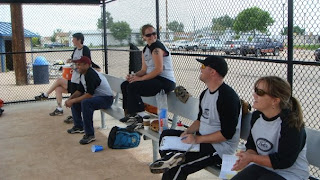 Well we are half way through the softball season and it is time to evaluate the go forward plan. In March I decided to go ahead and sign up and then make a decision after the first four weeks of the season (original post). Time commitments have been a larger obstacle than I initially thought. I have had family and other commitments two of the six weeks. The four weeks I participated I only played the opener of the double header.

There are six weeks remaining and I will miss the next two weeks with other commitments.

I have enjoyed the season and look forward to seeing old teammates and meeting new ones. I have been playing in the outfield with par performance with no spectacular catches or errors. My hitting has been atrocious, but I finally put one over their heads last weekend. It was exciting because this was the game the family came out to. Unfortunately we lost that game.

As far as durability is concerned, I have been warming up and playing conservatively (knock on wood). We have had a few tight hamstrings, but only one significant injury in which a teammate misjudged a fly ball. I believe the triathlon training has served as a good conditioning tool. The 10 hours I have spent on softball this year has not impacted my triathlon goals yet.

Currently I will plan on finishing the season and retiring in style. If family responsibilities change between now and next season I can certainly re-evaluate. However, given that I am on the hook for watching the kids solo one weekend/month and that triathlon racing season runs June through August I would like to take a season off as a retrospective.

The last time I took a season off, I missed it and was wary of letting go of another hobby as I stopped playing basketball. My excuse for my last missed season was again time conflicts. However, I did not manage anything productive with the found time.
Posted by Steve Gupta at 10:23 AM
Labels: hobbies