I finished out the 2012 season with the Westside Duathlon.  I finished the 5K Run – 30K Bike – 5K Run in 2:32:45 (157/172).  I was really pleased with my performance and time.  Although relative to the field, my time was disappointing.  I put together a race plan and was able to execute on it to the best of my ability.  I was shooting for a 2:37 and was well under that based on a strong bike leg.

I did the short course version of the race two years ago and had a lot of fun.  This year I felt ready to tackle the long course (standard course) version.  Weather conditions were ideal.  It was slightly cool when I left, but not so cool that I needed the arm warmers or jacket.

The field went out pretty fast on the first 5K, and I even clocked a 9 minute first mile.  I was shooting for a 31 minute run and finished the first run in 32:44.  While slightly off my goal pace it was 145/172 for the first run.

The bike course is rolling and as I was doing two laps, I wanted to make sure I paced well.  I was also planning on taking on nutrition as I would be out on the course for a couple of hours.  I was shooting for 1:30 on the bike and ended up finishing in 1:21 (13.8 mph, 121 watts average power).  I was very pleased with this result, even though it was 162/172 bike splits.  My bike has been my weakest leg for quite some time.  I did take in a chocolate Gu and a bottle of water which was enough nutrition for the event.

The second run was the same as the first and I was again shooting for 31 minutes.  Unfortunately I was well off of that mark with 34:49 (141/172).  I was starting to feel pretty drained and walked a couple of minutes on the up hills and used the restroom.

I got a boost from the Arvada Triathlon club which had some members out there cheering and participating in the race.  Racing Underground puts on great events and this was no exception.  I enjoyed a burrito courtesy of El Senior Sol.  I also tried out a Compex Muscle Stimulator at the Hammer Nutrition booth.  I have researched these in the past and was pleasantly surprised that my legs felt pretty good after only 10 minutes of the active recovery program.  I may have to pull the trigger on buying one of the systems.  Picture courtesy of Skipix.com 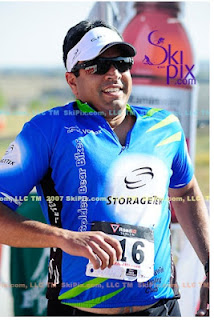 Posted by Steve Gupta at 9:46 AM
Labels: hobbies