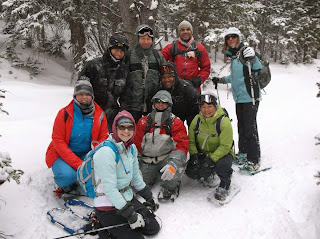 This past weekend I had a chance to go on a snowshoe hike with the 3W races group.  Despite owning a pair of snowshoes, I had never actually been.  The excursion was planned for Brainard Recreation Area and proposed a 5.1 mile relatively flat hike.  The weather had been warming up, however the wind had been picking up as well.  Brainard is at 10,000 feet and anybody who is familiar with Colorado weather can tell you, anything can happen.

As directed I dressed in layers, but failed to consider how much blowing snow I would encounter.  It would have been beneficial to wear ski goggles, shell pants and jacket.  Fortunately the group leader had an extra scarf I could borrow.  Once on the trail, the hike was very pleasant.  Compared to summer hiking, the trail was relatively quiet and consisted of other hikers and cross country skiers.  There was plenty of snow which made the snow shoes a necessity.

Our group of 9 did a short hike on the Sourdough trail.  Our total distance was 3.9 miles.  We started along the Sourgdough trail and finished on Brainard Lake Road.  We took a couple of breaks for water and snacks and it was fun to hear about individual’s adventures and plans for 2014. 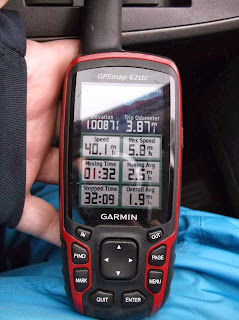