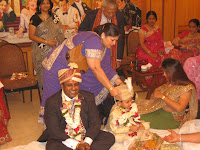 Late Wednesday night we flew off to Mumbai. At this point I have to give props to Jet Airways. The crew is friendly and the service is courteous and efficient. On a two hour domestic flight in the U.S. the crew can barely manage to close the overhead bins, give out peanuts and if lucky get drinks distributed and collected. Jet Airways managed to serve drinks and dinner during the course of an hour and fifteen minute flight. They even had an infant meal which was heated and promptly delivered for Diya. While the infants in India may be able to consume 12 ounces of food in an hour, Diya only managed 5 bites, but it was very thoughtful. I understand that the international service is excellent as well.

Arriving in Mumbai at 2:30 AM was quite the ordeal for my cousins who collected us while taking care of wedding preparations. We successfully settled into the Sukkar Bhavan and for the first time since leaving Denver had a little privacy. Granted all we did was sleep and shower, but it was still very nice.

Thursday started off with a puja to start off the wedding time. It was a very nice ceremony attended by close family and friends. There were about a dozen of us at the Krishna temple. This was followed by lunch and unwinding in Mumbai. Dinner Thursday night was Indo-Chinese which was very tasty.

Friday was more the official wedding start which started with a Sant Puja to prepare the groom. Gautam’s Mamas played a large role in the ceremony which lasted about two hours. The ritual behind wedding ceremonies is very complex but is all rooted in cultural and family values which are carefully maintained by priests in India. For example a Hindu ceremony is very different from a Catholic ceremony. However this continues as a Gujarati ceremony will be different from a Punjabi ceremony and even among Punjabis different Castes, Gotras, and families will have variations that define how the ceremony is to be conducted. For events that included the brides and grooms side three priests were in attendance to make sure the ceremony was performed properly to both families’ expectations.

That evening was the Sangeet at the Mahalaxmi Race Track. Getting there was half the battle as there were several weddings going on and finding the right one took 3 tries. The DJ was rocking and the food was great so enough said.

Saturday Diya got to meet her Great-Grandmother who at 84 years old is very vibrant and alert. They enjoyed playing tug-of-war with a towel. Ratna got to do some site-seeing around Churchgate Station as well. I had the opportunity to participate in another ceremony in which the groom’s family is to deliver gifts to the bride. In this case it was a langa and some jewelry. It was followed by lunch at the Kings Hotel.

Saturday night was the wedding night. It was held at the Ramada and was a quite lavish affair. Again I highly endorse the appetizers. Dinner was quite good also. The photo is from the Bharat which started at a nearby hotel and went down Juhu beach. Sakshi and Gautam seemed to even be enjoying themselves among the guests and festivities. Diya’s patience wore thin around 12:30 AM and we decided to leave although the ceremony would probably run another couple of hours.

Sunday was a day to unwind and collect ourselves prior to the long journey home. Dinner that night was Indo-Mexican which was quite tasty also. I was not much in the mood for a large meal as we would again be traveling that evening.
Posted by Steve Gupta at 1:59 PM
Labels: travel