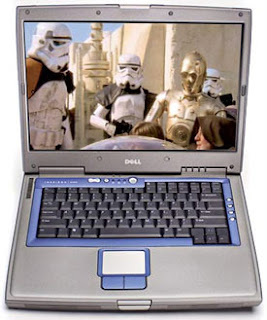 I initially purchased my laptop computer in 2004 when I was enrolled in an MBA program. I did have a home computer at the time and it was more than sufficient for writing papers and developing spreadsheet models. However, I needed the portability as computer based exercises entered the classroom.

Over the years my laptop has graduated to a work from home piece of equipment necessitating the installation of additional software for work e-mail and Star Office applications. This natural progression was not too difficult as I work from home less than 5% of the time.

The pain started as I began working on video heavy applications. I had purchased a video camera along with a portable video player. I soon found myself video editing and converting video to various formats for DVD burning and video on the go. This crippled my 1.6GHz system with 512Mb of RAM and blew up my 40GB hard drive. For reference my most recent work computer has a 2.2GHz processor with 3.2Gb of RAM and an 80GB hard drive.

The impetus for this post is the fact that my laptop has become painfully slow and has forced me to try various tricks to improve performance. The years of bloatware accumulated downloads and uninstalls became difficult to work with. The straw that broke the Inspiron’s back was some sort of Dee Woo executable that burrowed itself into my system file.

At this point, I decided it is time to just re-install the system software and start over with a formatted hard drive. This sounded a lot easier than I have found it to be. Fortunately my needs have changed and I can intelligent build up my system.

I started with a 2002 editions of Windows XP home edition. This was followed by the device drivers and then the tedious gradations to Service Pack 2 and Service Pack 3. At this point, I downloaded McAfee and felt pretty good about things. The next steps were Mozilla/Thunderbird in order to access work e-mail, iTunes and Tivo software.

For now I plan on stopping and will make game time decisions on an office platform, rhapsody, and garmin software. I have no intention of reinstalling palm, riproar, or other software from bygone devices. It won’t be long before I pick up Adobe as the need to view a pdf will surely arise.

My home computer is primarily (60%) an internet portal to keep in touch with family and friends as well as research various items of interest. Work use is another 20%. Finally video processing would encompass the last 20%. With this in mind, I believe I will be able to survive another couple of years before upgrading the memory or entire system. The other driver is the lack of a DVD burner, which has become increasingly important for some reason.