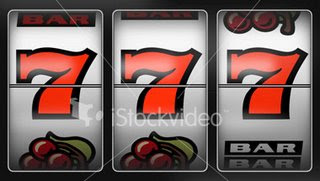 While I have always considered myself a skill player who turns poker into a positive expectation venture, I am not immune to the forces of luck. I had a reasonable month of November and posted back to back winning sessions to close out the month. December started off on a down note after hanging out card dead in an Omaha game for a couple of hours and getting snapped off a couple of times in a Holdem game.

This quick down turn to start the evening had me wandering around the house backed table games and slot machines. I abhor the video machines. I never know what the payouts are or optimal strategy. With the reel machines, even if it is computer controlled, the payouts and play lines are much simpler to follow. I peeled off a $20 and fed it to the one armed bandit. It happened to be a dollar machine with varying payouts bars, sevens, and the jackpot multiplier 4X. This bill got swallowed in short order with my only payout being a single cherry which pays 2 to 1. Not willing to walk away until I had at least a $10 payback, I fed the machine another $20. This one was progressing similarly until I was down to the last two pulls.

The machine came up 4X-Triple Bar-4X and the lights started flashing. Not being a slot player, I did not know how much I had won, but knew it was good. Surveying the machine, I spotted that the machine will payback amounts up to $400 so it was better than that. As it turned out Triple Bar was a $90 payback and the multipliers combined to make it 16 X $90 = $1440!!

Being one o’clock in the morning, I could not call home, but was pretty excited as my best slot winning to date was $80 and my best session of anything was a $700 run at the craps tables.

During the drive home, I spent the money several times over on a new kitchen stove, a power meter, bicycle racing wheels, plane tickets to Memphis, etc. Then I settled down and thought about my unexpected bills this year including the root canal and podiatrist visits. Finally I thought about all of the poker money I have blown over the past 5 years I have been keeping track and decided that the $1440 should probably just slide its way into a savings account.
Posted by Steve Gupta at 9:27 AM
Labels: hobbies

I am excited that you hit the jackpot - no matter how much, it is still nice to have lady luck strike sometimes. We should buy a lottery ticket this week.