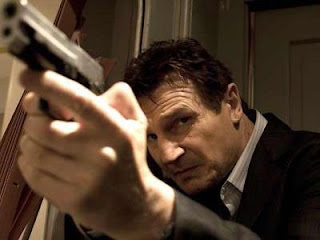 This week I had the opportunity to see Taken with Liam Neeson (Bryan Mills). This is by far the best movie I have seen in the past few months. It starts off as a non-descript family drama and rockets into an action movie that would compete with James Bond any day of the week.

Our hero ‘s work for the U.S. intelligence community left him with an ex-wife and estranged 17 year old daughter whose life he is trying to re-enter. She decides to go on a concert tour of Europe against his advice and as the title goes, she is taken. Mills then is off to find her and enlists several of his old contacts and stash of spy stuff.

I would highly recommend this film for action movie enthusiasts. At times the movie can be disturbing in terms of its premise and violence, however that is table stakes for entry into action films any more.
Posted by Steve Gupta at 2:08 PM
Labels: movies