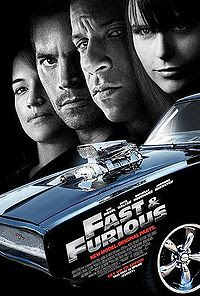 A couple of weeks ago I had the opportunity to see the latest in the street car racing series. The plot to this film flashes to include Vin Diesel who returns to the U.S. to avenge the death of his original beloved. Our FBI friend is on the same trail and obviously their paths cross. Kind of like the old Tom & Jerry cartoons, they are enemies as well as friends. It was kind of fun to flash forward in the duos life to see how their demeanors have changed.

The acting was no better than usual, but the tuner cars were pretty cool. The action sequences were not very well thought out and I found myself tiring of trying to keep up with what was going on.