Racing Underground put on another great event with the Westside Duathlon which was contested Sunday in Arvada. They have a great crew and volunteers and I was excited to be part of the inaugural event in my own back yard. I opted for the short course (1.2 mile run, 9.3 mile bike and 3.2 mile run) as I hadn’t been training much. I had a gout attack 2 weeks ago and I was just thrilled to be out on the course.

The first run was pretty quick and I started off a little faster than I had planned, but knew I would have time to settle into a groove during the bike. Transition was OK, but I need to start training without wearing gloves.

The bike was fast. I covered the course in just over 40 minutes and averaged 125 watts. Compared to the rest of the field that sucked, but I was thrilled. During my training rides it usually takes me 45+ minutes to get around the course. I have never averaged over 100 watts for a bike ride.

The second run was exhausting. The temperature had started to creep up. Transition was OK and I stopped by the port-o-let. The first mile of the run was all downhill and it was mentally challenging to know that I would be climbing back up to the finish line. Fortunately they had water at mile 2. I walked for about 90 seconds but was able to maintain a rhythm the rest of that last mile.

Overall I had a lot of fun and will definitely keep the run-bike-run format in mind for the future. 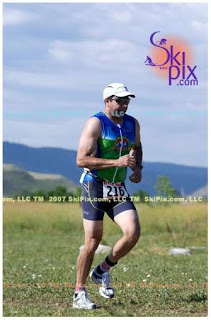 Thumbnail from Skipix who did a great job photographing the race
Posted by Steve Gupta at 10:45 AM
Labels: hobbies