Last time we traveled to India, I had pretty extensive 7 part series detailing our flights, accommodations and activities.  This trip was shorter 10 days versus 17 and only featured Delhi and Ahmedabad.  Most of the trip was spent in the city with family and we did not do any sightseeing aside from the malls and dining out a few times.

Preparing for an international trip is a challenge and this time rather than having one 8 month old, we have a 4 year old and a 2 year old.  To complicate travel plans, both came down with the croup 2 days before we were supposed to fly out.  Packing was more of a challenge as well as Lufthansa allows only one 50 pound bag/person. Of that allowance, 75 pounds was gifts for family and the remaining 125 now had to accommodate four larger people.

We did manage to get typhoid immunizations and malaria medication although I am not convinced that is necessary unless spending a lot of time in country and eating adventurously.

Lufthansa was a great airline and we flew from Denver to Frankfurt and then Frankfurt to Delhi.  The layover on the way out was only 3 hours so we did not venture into the city nor did we want to with 2 kids in tow.  They both traveled well and enjoyed the personal touch screen monitors to watch cartoons and animated movies.  The meals were interesting as we ordered two standard meals, one vegetarian and one fruit plate.  The bases were all covered and nobody went hungry.

The flight from Frankfurt to Delhi was more of the same except this time we were on a full flight and the girls could not stretch out as easily as we could with one open seat.  We arrived around midnight and flew through customs to be greeted by Sunil Mama, Arun Mama, Nikhil and Lakshay.

Saturday we basically slept and mulled about the house.  The 12 hour jetlag can be pretty bad and the girls were still recovering from the croup.

Sunday was a little more interesting as Ratna attended the Kirtan function and the girls became more comfortable with their chachus and chachis.  We also went to the park a couple of times.  The design of the park is very different from parks in Colorado, but there were no serious injuries and everyone’s tetanus shots were up to date.

Monday was an uneventful day.  We did go to the mall which was pretty impressive.  This three story monolith had everything.  I looked at a Sahara India cricket jersey, but the 2850 rupees ($57) price tag was a rude awakening that stuff is not cheap in India.  We also stopped in “Mad Over Donuts” and let the kids play on the arcade rides.  Monday night we went to Akhil and Ankhit’s flat for Akhil’s birthday party. 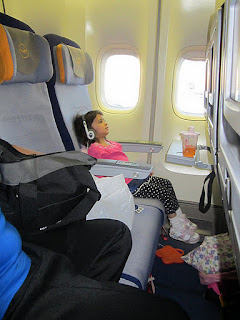 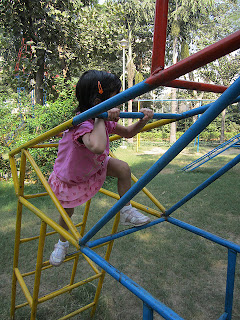 Posted by Steve Gupta at 9:31 AM
Labels: travel