Friday we returned to Delhi for 3 days of wedding activities.  Friday afternoon was mendhi and all of the women along with the groom had mendhi applied throughout the day.  Friday night was the dance party which the girls really enjoyed at the start of the night.  It was held at Arun Mama’s house and the appetizers and main course were good.  The DJ got carried away with repeat songs, but nobody seemed to mind.

Saturday was the Sant which is a ceremony to purify the groom.  A fruit basket was sent over Saturday afternoon and along with the largest banana cluster I have ever seen, I also had the opportunity to try a custard apple.  I really like exotic fruit and this was kind of tough to eat, but tasty.  Saturday night was the ring ceremony.  This was held at the hotel and our family went off in a car rather than the bus.  The hotel was really nice with an outdoor pool.  They were serving scotch, vodka and Budweiser along with non-alcoholic drinks.  As I side note, I learned that India is the 5th largest importer of scotch in the world.  The girls were having a tough night and unfortunately we left before all of the dancing with Pooja’s Father-in-Law.

Sunday was the official wedding.  It started out with the Bharat from the house.  Diya did a good job sitting during pictures, but did not do so well getting on the horse.  The snacks were really tasty.  We then took the bus to the hotel for more of the Bharat.  It was followed by more eating and waiting for the bride to arrive.  Everything was grand, but we ended up missing quite a bit of it as the girls had another meltdown.  This time on the way back we had a tour of Delhi as Monicka Mommi’s Brother-in-law was not quite as familiar with the roads.

Monday was a day of packing and relaxing.  The trip to the airport began a little earlier than planned as I misunderstood the flight times.  There were more than a few negative omens as we began the journey.  First Nisha vomited in the taxi, next a lady fainted as we were unloading the taxi, and finally we could not be found on the Lufthansa manifest.  Once we actually got into the terminal everything started clicking along.  We checked our bags, went through security and enjoyed the Delhi airport which had a great play area along with Domino’s Pizza and McDonald’s.  A made the mistake of not purchasing Johnny Walker Platinum Label when I had the chance.  Upon returning stateside, I learned it is currently exclusively available in the Delhi duty free shops.

The flight to Frankfurt was uneventful and we had extra seats again for the girls to stretch out.  The layover in Frankfurt was longer and we found the play area there as well.  The flight to Denver was a bit tougher as we were packed in and did not have the luxury of in headrest touch screen monitors.  The girls were sufficiently entertained and we made it back, picked up the car and drove to our secure (but cold) house. 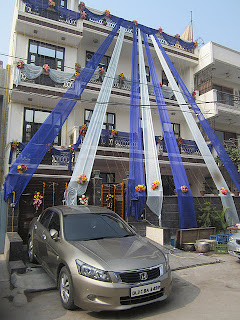 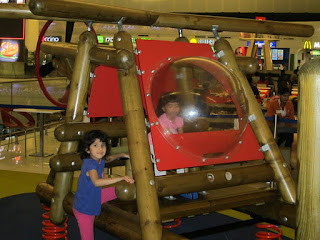 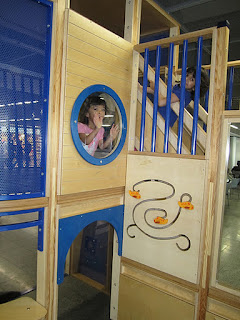