This past week I was in Santa Clara, California on business.  I had the opportunity to go for a run and stumbled across the San Tomas Aquino Creek Trail on yelp.  It got some reasonable reviews and was a couple of miles from my hotel.  Finding it was really easy.  Running on it was even easier.  Despite a stiff headwind going out, it felt surreal to be on flat terrain at sea level.  The only dips and rises were underneath road crossings.


The trail was not particularly scenic as it just coursed along a drainage canal.  I did spot some wildlife and had a great outing.  I headed north from the intersection of Monroe Street and South Drive.  The first mile marker I saw was 3.75 and they descended from there.  I got to mile 2.0 and the trail was closed.  I decided I wanted to get 4 miles in so I headed east on Agnew Road.  The pictures below are from the run back. 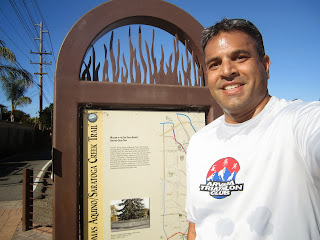 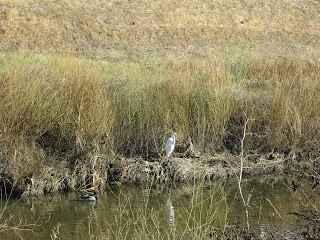 Create Maps or search from 80 million at MapMyRide
Posted by Steve Gupta at 1:18 PM
Labels: training