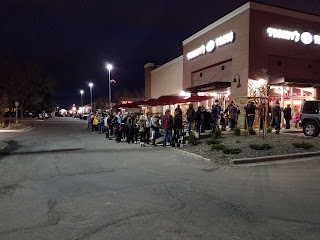 After several months of anticipation, Torchy's Tacos had their soft opening (versus Grand Opening) last night in Arvada.  People were told in advance to expect delays and hiccups, but aside from the tremendous turnout everything seemed to be running smoothly.

Me and my daughters arrived around 5:15 PM and started in the appetizer line.  After about 15 minutes, we were each given chips along with guacamole, queso, roja and tomatilla sauce.  We munched on chips in the main service line and were particularly impressed with the queso.  My wife arrived after we were in line for roughly a half hour.

We were in the main service line for a little over an hour.  While in line we got some free t-shirts.  Once at the front of the line, each of us were treated to beverages, 2 entrees, and dessert all on the house.  I had a chicken fajita taco and a Mr. Orange (blackened salmon).  My wife tried the Breakfast Taco and the Fried Avocado.  My daughters enjoyed rice and beans along with tortillas and street corn.  Dessert including a sampling of dark chocolate brownies.

All of the dishes were pretty upscale, with tangy sauces, sour cream, salsas, cilantro, cheeses,  This is great for adventurous eaters, but for my daughters (who don't care for even cheese or salsa on their refried beans) it was quite disheartening.  The next time we go, we will be sure to customize our order significantly.  Even I found the dishes to be a little spicy for my tastes.

The restaurant itself is really large with a full bar and Maine Root soft beverages on tap.
Posted by Steve Gupta at 12:58 PM
Labels: events, family