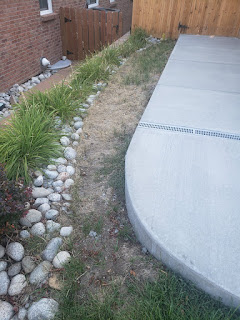 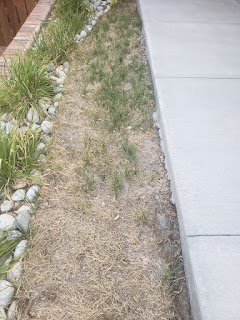 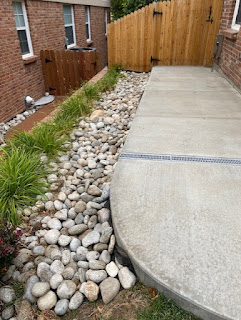 As should be abundantly clear, I am not a big fan of landscaping projects.  However, I was finally inspired to rock over the dying grass adjacent to the concrete walkway we installed in April.  Four months does not seem like much time, but I was getting tired of looking at it.
The project started innocently enough digging up the dying grass a few inches below grade to match the rock that was already there.  Pulling out the metal stripping was incredibly painful and took the help of my 15 year old.  Once excavated, putting down the weed barrier fabric was effortless.  The real effort was "foraging" and placing rocks.  We had some extra river rock from the walkway project when a bush was removed to make room for a trash can landing.  Then we just started thinning out river rock from around the property rather than purchasing.  We sometimes carried and sometimes had a fireman brigade line going, but they did all get placed.
The final step is cleaning and disposing.  I still have several garbage bags of dirt in the garage that need to be disposed of along with the metal strips.
The project was about 8 hours in total family labor plus $25 in materials for the fabric and strips.  Hopefully it holds up well.
Posted by Steve Gupta at 8:16 AM
Labels: family, landscaping