The 3A Marching Band State Championships returned to Colorado Mesa University (CMU) on October 31, 2022.  As both of my daughters are members of the 2022 D'Evelyn Marching band, my wife and I decided to make the trip.
We dropped the girls off at the charter buses 8:30 AM on Sunday and then packed up and got on the road ourselves around 11:00 AM.  We made a couple of stops and by happenstance caught up with the girls at the rest stop in Parachute, Colorado where they were finishing up lunch.
We arrived in Grand Junction around 3:00 PM where some friends were waiting on us to go for a short hike in the Bangs Canyon Special Recreation Management Area.  We followed the Rough Canyon trail about a mile from the trail head before scrambling up to a "slot" in the canyon wall.  We played around in this crack for about 20 minutes (and only managing about 30 feet) before making our way back. 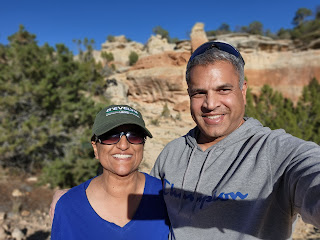 Returning to the Hotel Maverick we got cleaned up and joined some other parents for dinner at Edgewater Brewery.
Monday was band day and preliminary performances were starting around 9:00 AM.  Ten 3A schools were invited to the state championship and D'Evelyn was fortunate to be selected for the finals along with Windsor, Pueblo, Evergreen and Palisade.
Having a long break, I visited the rec center, wandered campus a bit and then relaxed in the room.
Finals were exciting and we watched all of the performances. There was a 2 hour gap between final performances and awards so we grabbed a bite to eat at Diorio's Pizza.  We returned in time to see the CMU band perform and then see the awards for 1A, 2A and finally 3A.  D'Evelyn squeaked out a nail biter of a win over Palisade in 2nd and Pueblo in 3rd.  It was pretty emotional for a lot of the parents and kids 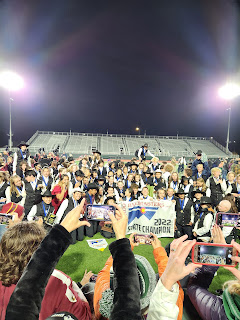 We headed back to get some sleep.  I made a return trip to the rec center around 8:00 AM and then grabbed a burrito from the University Center before heading back to the room.  The kids got on the road around 9:00 AM and we headed out shortly afterwards around 10:30 AM.  The kids made pretty good time and we were nearly late picking them up.  We had a really nice lunch at Pure Kitchen in Frisco.
It was certainly an adventure for the kids to go on a school trip.  The buses were loud, meals were not optimized for their tastes, it was 3-4 kids per room and it was a big production to be outdoors warming up, waiting and performing.  Fortunately the weather was unseasonably warm, but I am still very impressed with how they managed.  Upon returning, they also have to contend with missing 2 days of class, make up work and make up tests.  Yikes.
Posted by Steve Gupta at 9:50 PM
Labels: family, travel