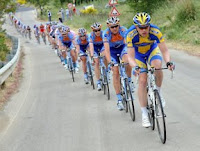 It has been a long time since I have followed competitive cycling. Interestingly it is much easier to follow the sport now than in the past. The internet (and hardcopy) coverage provided by VeloNews is excellent. There are also numerous blogs and television coverage with Cyclism Sundays.

This year may be the year as Slipstream-Chipotle has been invited to the Tour de France. I had the pleasure of watching stage 2 of the Giro d’Italia on Sunday. Although there was a bustle of activity in the house, it was not too much of a distraction. Granted the commentators are more valuable to a newbie than a hard core enthusiast of any spectator sport. However, for just getting up to speed and hearing the names of the riders, I was having a good time.

I even went as far as getting some team gear in the form of gloves. My current XL Pearl Izumi gloves were found on the side of the road about 5 years ago. They are still in fine shape as I don’t put in enough miles to damage cycling gear. My new ones fit better and of course sport the Slipstream team logo. I was lucky enough to find them on sale at REI before purchasing them for full price at my other gear venues. 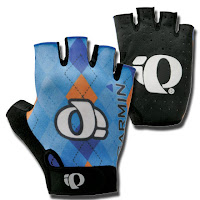 Looks nice gloves. I would also browse REI for my favorite bike gloves.