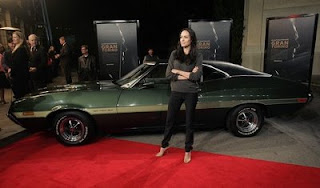 This weekend I had the pleasure of seeing Gran Torino, with Clint Eastwood. It is set in the Midwest and is a portrait of a man who is recently a widower, estranged from his family living quietly in a neighborhood that is quickly becoming engulfed by Southeast Asians. Our hero meticulously cares for his lawn and views his neighbors with disdain with his personal history of fighting in the Korean War and working his entire career at the now shut down Ford plant.

The catalyst for his branching out beyond his four walls is the teenage boy next door who is commissioned by the local gang to steal his 1972 Gran Torino as part of an initiation. This leads to him taking the boy under his wing and subsequently acting as the gang’s only resistance in the neighborhood.

The film was well acted and the racial dialogue and violence were not overdone. It was surprisingly appropriate to convey the message the ethnic groups do have stereotypes. It also relayed that the stereotypes can be overcome or reinforced by individuals’ actions.

If you enjoy Clint Eastwood’s films, you will certainly enjoy Gran Torino. If not, you may find the story line a little overdone with overtones of the Death Wish trilogy with Charles Bronson. I would consider it well worth renting for first generation Americans or those interested in the Hmong People.
Posted by Steve Gupta at 9:40 AM
Labels: movies