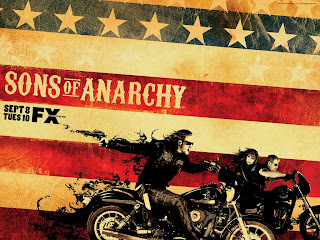 Well my favorite television drama posted its season 2 finale last night. There is something about outlaw bikers that is compelling. Combine them with run-ins with the IRA, Black street gangs, Asian street gangs, other bikers and the Aryan Brotherhood and the characters become a synopsis of Gangland. The story line has become quite convoluted and you never know which characters are going to pop up next and to what end. However the action on an episode to episode basis is great.

I really like the cast as well. They are a mixture of familiar faces and up and comers. A big test will be who survives the cut if a 3rd Season is developed. Actors can usually command a higher salary entering a 3rd season. It is not often that I take the time to research a television drama. I have ended up reading interviews with the creator and even the various blogs. Now I know that they ride Harley Davidson Dyna Superglides (and I want one). My loyal reader understands that I will not be purchasing a motorcycle or any other “Reaper” gear, but I still feel obligated to browse.

The last time I was this enamored with a television drama was when I came across The Soprano’s which was quite the hit on HBO for a number of years. One common thread is the violence and another is that both were intended for mature audiences. I think the toned down language at the major networks is no longer true to life.
Posted by Steve Gupta at 1:55 PM
Labels: hobbies