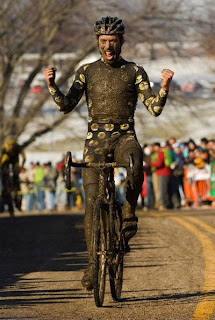 I had the pleasure of watching “The 9 Ball Diaries” last night via Netflix instant play. Netflix doesn’t offer a large percentage of its movie library on instant play, but this caught my eye. It follows the cyclocross season of Tim Johnson as the rides the USGP series on way to the US National Championships.

I have only ridden one cyclocross race and that was 8 years ago on a mountain bike. I got lapped by the field pretty quickly. Johnson on the other hand narrates really well what it takes to “be” on the circuit. The picture quality and angles are terrific given the gruesome conditions. The documentary was paced really well also. It is less than an hour long and does not have any fluff or filler.

While it did not inspire me to build up a Ridley and hit the Boulder Racing series, it was a great film for an athlete to watch to kick off the season. Similar to “American Flyers” it just leaves a good taste and primes the pump for fast miles.
Posted by Steve Gupta at 1:08 PM
Labels: movies

Wow! That was quick! Thanks for sharing. Can't wait to see your review of the mainstream movie.