This past weekend I had the chance to compete in the Germantown Half Marathon.  When I was growing up there, we had the Mayor’s Cup 5K.  The half marathon is in its 14th year.  This year it also served as the Road Runner’s Clubs of America National Championship event.

I was very impressed by the event.  Packet pick-up was a breeze and the pre-race expo full of cool stuff.  Race parking was easy for the 1500 runner field.  The lines for the restrooms were not bad and the start line had corrals by pace.  The course itself was flat and fast.  All of the streets were blocked off by the Germantown Police Department and there were 6 aid stations on the course plus an unofficial aid station.

The course was line with spectators as well.  I was amazed at how many people were at the finish line.  The post race festivities were pretty good as well.   I did not stick around for the awards, but I did fill up on food and drink after the race.

After the 2:31 at Ralston Creek, I did not know what to expect in Germantown.  Being sick on and off for 2 of the last 3 weeks also gave me concern.  I started out feeling really good and was clipping off 9:30 miles without much effort.  I actually debated trying to pick up the pace around the half way mark, but fortunately I had the good sense to maintain my pace.  I eventually started to slow in miles 10, 11 and 12 and was planning on just coasting to the finish.  With 1.1 miles left to go, I turned it back on with a 9:40 split for mile 13 and capped it off with a reasonable finishing kick.  I guess the lower altitude and pleasant weather were enough of a factor to allow me to finish in 2:11.

I would highly recommend the race to anyone and am considering making it an annual event for my calendar. 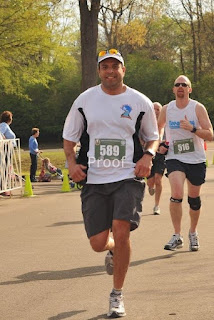