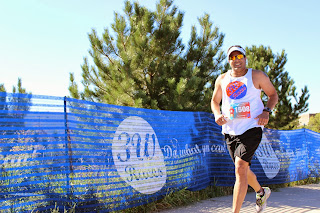 Thanks 3W Races for putting on another terrific event.  I was able to get out early for packet pick-up at Sports Authority in Superior.  In addition to hosting pick-up, they were also handing out 20% off coupons.

Race morning was clear and cool with calm winds.  Thanks to the city of Westminster for getting the Big Dry Creek trail in shape and to Target for hosting the race start and finish.  With 5 port-o-lets lines were not bad and the race start was well organized.  It was great to see the kids run as well as the wheel chair division take off before I took my place near the back of the pack.

The field took off pretty quick and I started out a little faster than my desired pace of 10:30/mile.  I ran into a friend from the Arvada Triathlon Club who made the first half of the course go by much easier than I could have ever hoped for.  The aid stations were great.  The first one was an 80's theme complete with music and costumes.  One of the aid stations at the middle of the course was "Mom" themed with water and FRS in cupcake trays along with some pretty funny signs.  My favorite is still "Run Fat (stupid autocorrect)."  One runner who just happened to be on the trail and noticed an aid station not set up actually broke off his training run and started pouring water for racers on the course.  Thanks Bill!

There were lots of friendly faces taking pictures on the course and that made the miles go by smoother also.  I brought my own gel so I did not get the chance to try the Powerbar Gels on the course.  I hit the turnaround at 1:07, which was right on track for my goal pace.  The second half of the course was slightly up hill and the weather had started to warm up as well.  I slowed down a little bit but felt really good, despite an average HR in the mid 160's.

I didn't get to visit all of the sponsors booths, but I did see Newton Running, Max Muscle, Bighorn Crossfit, FRS and Ugly Sports.  My kids were thoroughly entertained with hula hoops, face painting and a dress up booth.

3W always has a great finish line environment and they were awarding age group medals, throwing out t-shirts and even having a dance contest for a pair of Newtons.  Donations were being collected for Growing Home of Westminster.

Create Maps or search from 80 million at MapMyRide
Posted by Steve Gupta at 9:31 AM
Labels: hobbies