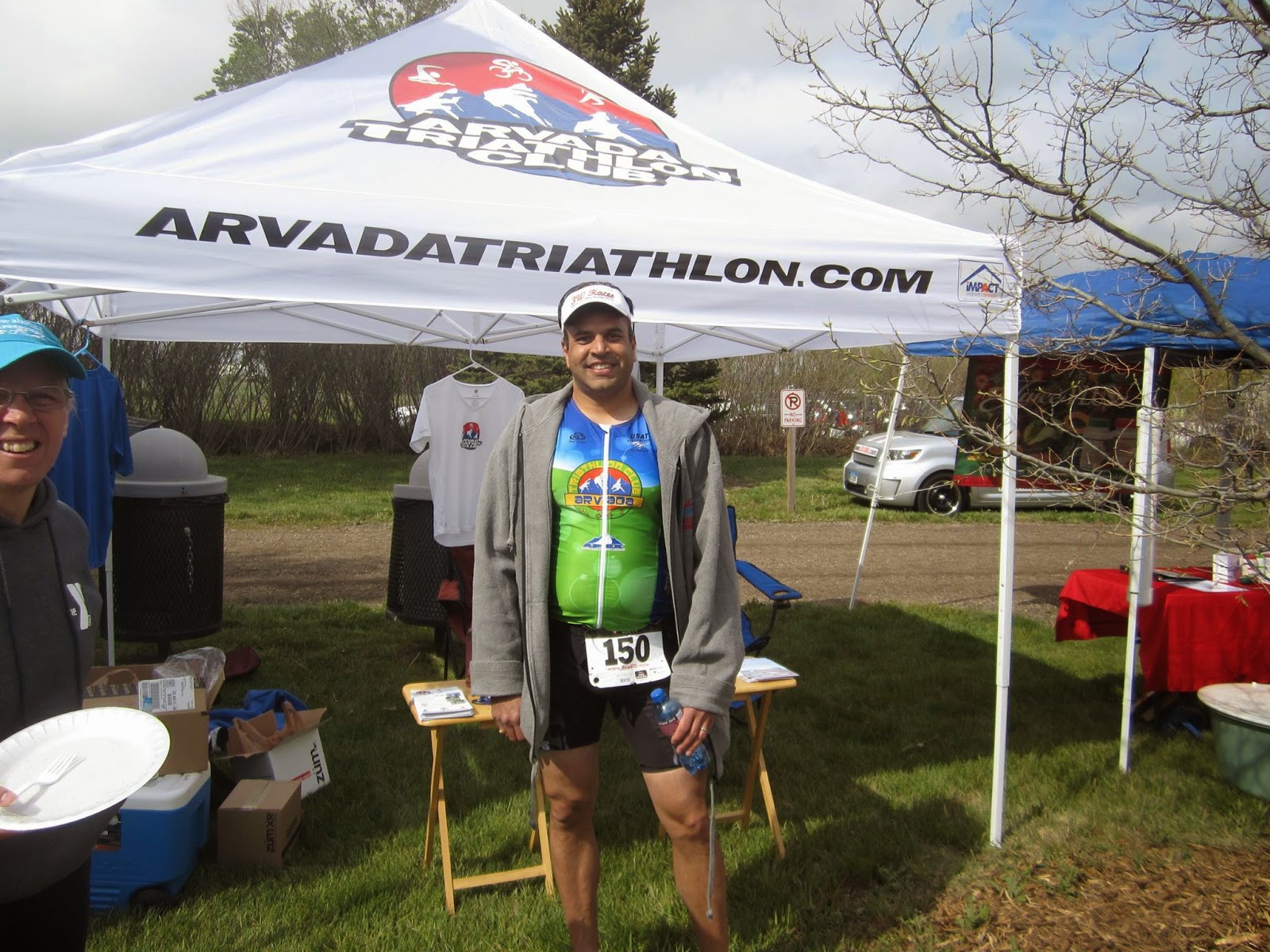 I was pleasantly surprised with my 1:32:56 finish at the Summer OPEN Sprint (240/366).  I arrived early and the weather was cool and overcast.  I set up transition and then set up the canopy and chairs in the “expo area.”

I did munch on a Clif bar during the drive in and drank about half of a ZumXR.  I did not do much in terms of a warm up.  I settled into my wetsuit, thermal gloves, booties, ear plugs, warm wear cap and race cap and got into the water.  58 degrees felt incredibly cold.  My arms were freezing and when I got out and the two waves started in front of me, I was shivering.

Fortunately, when our whistle sounded I was ready to go.  I let the wave get about 5 yards on me and then started off.  I was pacing and sighting great and turned it on after the first turn.  I avoided all contact and was thrilled to be running up on shore in 11:46.  The swim may have been short, but it was still my strongest leg (156/366).

I jogged into transition and started stripping off all of my accoutrements.  I was confused as to what to wear, but decided to just dry my feet off, go sockless, gloveless, no jacket and just head out in my tri top and shorts (T1 = 3:11).  The course started off flat with a slight climb so my folly was not apparent until the turn around.  I was getting passed quite a bit on the bike, but felt like I was hammering.  I averaged 153 watts over the course.  Rough calculations indicate my first half was 13.1 mph and 179 watts average power.  The descent back was 18.7 mph and 126 watts average power.  I was coasting some and underestimated how much climbing I had done.  I did take on a gel around 50 minutes into the race on the bike, but did not hydrate much.  Bike was 46:52 (248/366).

T2 was a little eventful as I could not find my running shoes.  I went back and forth a couple of times, before finally finding my spot.  T2 was tough as my feet were pretty numb, but I was able to get transition OK as I didn’t have much clothing to strip (T2 = 3:03).

The run started out fast.  It was packed dirt and pretty flat except for a slight rise at mile marker 1.  I started out fast and tried to ease into a rhythm.  I did ratchet it back some and had plenty of gas in the tank at the turnaround.  It was nice to get some shout outs from fellow competitors.  I took on some Gatorade the first time I went past the aid station, but was all business the second time I went through.  I was thrilled with my 28:02 5K (9:07 pace) but this ended up being my weakest leg (257/366).  Nobody passed me in the last half mile.

I cooled down with pancakes and took some pictures around the expo area.  Without Limits did a great job with the event and everybody seemed to have fun, despite the chilly swim.  Thanks to the Arvada Triathlon Club and all of our sponsors for your support.

Create Maps or search from 80 million at MapMyRide

Yes!! Congrats on your times!