In our latest attempt to solve the age old question of "What's for dinner?" we have decided to experiment with meal delivery services.  Hello Fresh is one example that sent us 3 vegetarian meals with portions for 2 people.  Backing up a step, in our household, I will eat most foods and don't carefully review the sodium, fat, etc., my wife is a vegetarian who is very conscience of nutritional value, my 8 year old may have a bite of foods she has seen before (but is far from an adventurous eater), and my 6 year old eats chicken nuggets, noodles, bread, strawberries, apples and yogurt.

The boxes arrived well packaged and in a timely manner last Saturday morning.  Day 1, we decided to try the eggplant stew.  This was wonderful.  Unfortunately I kind of screwed up the recipe by using the entire jar of capers (about 4 tablespoons) rather than the 1 tablespoon that was in the ingredients list.  I should have looked more carefully rather than assuming pre-measured. 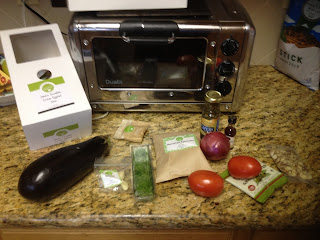 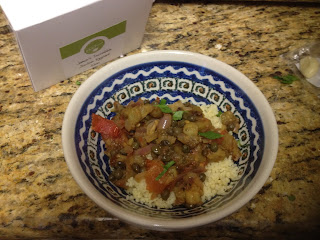 The ingredients were all very fresh and seemed to be carefully selected.  The recipe was easy to follow and did not require any specialty cookware.  It did take me a little over an hour to prepare instead of the estimated 30 minutes, but I enjoyed the process.  I was particularly amazed at how well the couscous turned out just by adding hot water and putting a plate over the bowl.

The next dish we tried was Sweet Potato Risotto.  Given my mix up that resulted in a lot of extra sodium, my wife supervised this effort and made an executive decision to cut the vegetable stock in half.  This dish was a lot more trying.  I have never cooked with pearl barley and really did not appreciate the end stage texture.  Again preparation was about an hour and twenty minutes rather than the suggested 45 minutes. 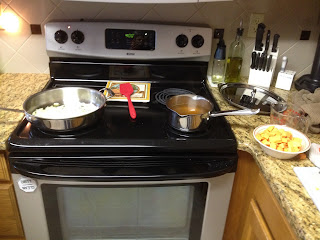 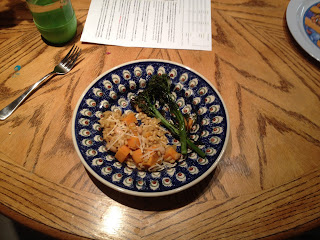 I did not like this dish at all.  I did not care for the texture and halving the stock turned out a very bland dish.  I did like the broccolini, but that was a pretty small concession.

Going through the process with two dishes, it is kind of fun.  I enjoy cooking, but don't necessarily enjoy grocery shopping and left to mine own devices, I would eat the same things over and over again.  For a true home cook who starts with great ingredients and then comes up with a dish, this would probably be a let down.  I would like to try omnivore options.  Even with veggie options, I could not see myself doing this once a week.  Once a month would probably be a good cadence.  It is cheaper and healthier than eating out.
Posted by Steve Gupta at 1:39 PM
Labels: lifestyle, shopping