Thursday - Walk down to Pike Market, have breakfast at Sisters European Cafe at Pike Place Market.  Have a Dole Whip and Black Cherry float at Rachel's Ginger Beer.  Grab an Uber to T-mobile park for the game.  Mariners lost 5-4 to the Cardinals.  Ate sno-cone, dipping dots and chicken strips.  Took train and then monorail to Seattle Center.  Played at park and International Fountain.  Ratna had a falafel.  Visited Chihuly Garden and Glass Exhibit.  Dinner at MOD Pizza.  Watched fireworks from Lake Union Park. 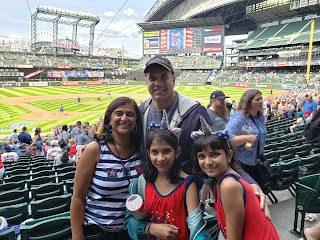 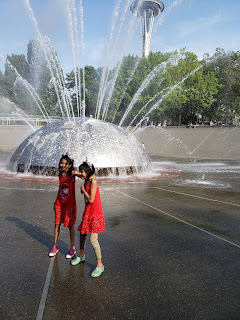 Friday - Walk to breakfast at Starbucks.  Got an Amazon Spheres tour from Maddie.  Went to the Amazon Go store and got a banana, chocolate bar and a coffee mug.  Checked out the Bill and Melinda Gates Foundation Exhibit.  Took the monorail back towards hotel.  Stopped at Pressed Juicery at Westlake Center.  Stopped by Pike Place Chowder in Pacific Place mall and got a Dungeness Crab Roll and Seafood Bisque Combo Meal.  Walked to Starbucks Reserve Roastery and tried the Malawi blend coffee and had some snacks.  Went back to hotel, picked up our bags and walked to Springhill Suites and got checked in.  Got an Uber to the airport and picked up rental car and drove to Maddie's house for game night.  Had Papa Murphy's and bagged salad for dinner. 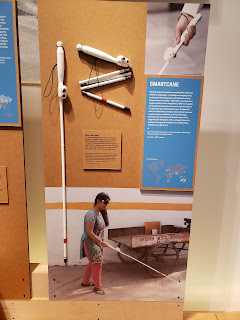 Saturday - Breakfast at the hotel.  Then drove north to Deception Pass State Park and hiked around.  Drove south to Coupeville (stopped for ice cream along the way)  Took Ferry to Port Townsend.  Played on the beach at Fort Worden Historical State Park (we should have brought swim suits).  Had a late lunch at Silverwater Cafe in Port Townsend (Ratna had Risotto, I had Fish and Chips, kids had pasta).  Drove home via Tacoma as Bainbridge Island ferry was running behind. 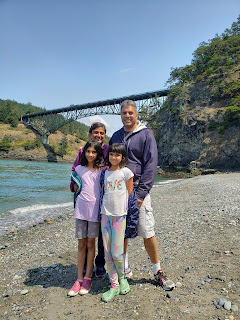 Sunday - Breakfast at the hotel.  24 Hour Fitness.  Bought souvenirs and saw the gum wall.  Met Chris, Conner, Maddie and Chris at The Museum of Flight.  Saw the Apollo 11 exhibit.  Had a snack and left for the airport.  Checked out the Centurion Lounge and Delta Lounge.  Flight was 30 minutes delayed.  Got home late Sunday night. 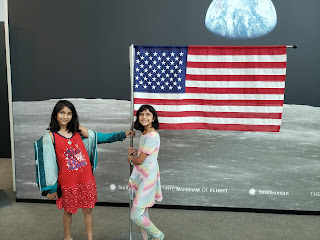 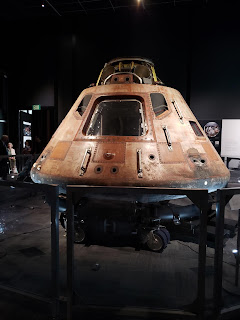 All and all it was a fun trip and not too hectic.  We had downtime here and there, but ended up getting home late nearly every night.  Staying near downtown was very convenient and public transportation is very good, especially with Uber and Lyft to fill in the gaps.  It helped that it was a holiday weekend without work traffic.

During the trip I finished Learning to Breathe Fire:  The Rise of Crossfit and the Primal Future of Fitness by J.C. Herz and Chasing Excellence by Ben Bergeron.  The first book was a great history and very entertaining.  The second was a little light on content, but a good checkout from the library.  I also started Fall; or, Dodge in Hell:  A Novel by Neal Stephenson.
Posted by Steve Gupta at 2:49 PM
Labels: family, travel